little aya is three! i cannot believe it. two was great, aya found her voice and she’s certainly not afraid to say no or stand up to someone if she sees someone being hurt. her bossy voice is hilarious, i’m pretty sure she inherited it from me. she is so freaking loving, she always has an animal on her (a stuffed one but to her they’re as real as anything) and loves to give them cuddles and kisses. i often find her snuggling her little kitty in the corner hushing it, petting it and whispering to it. she loves to paint and loves pop music. if it comes on the radio she screams “LOUDER!” until i cave and crank it. the girl likes to partay! and even though she’s getting bigger she’s still the biggest cuddler i know, i’m not ready for that to change anytime soon.

on another note: this photo shoot was absolutely disastrous. she fell asleep in the car and i had to wake her up before the sun set. she doesn’t like being woken up. there were some tears. the pics where she’s sitting happily on the ground with the balloon were snapped in moments merely fleeting. a massive swarm of dragonflies flew above her head seconds after i cracked a joke and amazingly got a smile. apparently she is terrified of dragonflies and let everybody hear about if for miles. and she doesn’t like the sound of giant balloons popping. they’re a lot louder than the regular size ones. 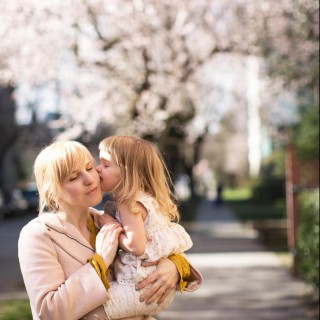 hello! this blog started as a photo a day to document ayas' second year of life. i happen to think two is one of the cutest ages and i didn't want it to fly by and forget it all (i have a terrible memory). then three hit, by then aya had turned into my little muse and there was no going back. we've been documenting three on a weekly basis. thanks for visiting!